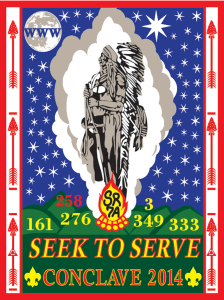 Weather: High temperatures were in the mid-70s with lows in the mid-40s. Sunny on Saturday and Sunday, but heavy rains Friday afternoon created muddy conditions which  required parking to be established at a nearby middle school.

Awards: At last night’s show, Shenandoah Lodge 258 won the Lodge of the Year Award. This honor is awarded to the lodge that demonstrates comprehensive success and achievement over the course of the year. Shenandoah also won the Quest for the Golden Arrow for the second year in a row. In a surprise win, Wahunsenakah 333 took the Spirit Award for the first time, breaking an eleven-year streak held by Shenandoah 258. To annually recognize those Southern Region lodges whose camping support efforts greatly enhance their council’s outdoor programs, the Lodge Camping Support Subcommittee developed the We Support Camping Award. The purpose of the award is to encourage and incentivize lodges to sharpen their focus on their camping support programs within their council. Southern Region Chief Wes Seaman presented both Wahunsenakah 333 and Shenshawpotoo 276 with this brand-new award. Herb Smith of Wahunsenakah Lodge #333 received the inaugural SR-7A Legacy Fellowship.