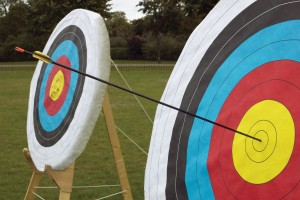 At Conclave 2016, Tutelo Lodge 161 will host the first ever SR-7A Top Shot competition. The competition will take place Saturday afternoon and will involve a dedicated team of six (four youth and two adults). One of the adults must be over 21 years of age. Youth must be registered in a Venturing Crew.

The following shooting disciplines will be used:

The models of firearms used in the competition are listed below so that team members can practice and orient themselves prior to competing at Conclave. The Blue Ridge Mountains Council will provide ALL of the firearms for the competition. NO personal firearms will be allowed on the Blue Ridge Scout Reservation property.

There are no prerequisites for the rifle, shotgun, archery, and mystery rounds. However, it is recommended that participants have the Rifle, Shotgun, and Archery Merit Badges (or equivalent).

For the pistol round, there are two mandatory requirements:

The Blue Ridge Mountains Council will provide the supervision for each shooting station. All instructors, range officers, and judges will be certified by both the NRA and the Boy Scouts of America.

If you are interested in joining your lodge’s Top Shot Team, contact your lodge chief or lodge adviser.